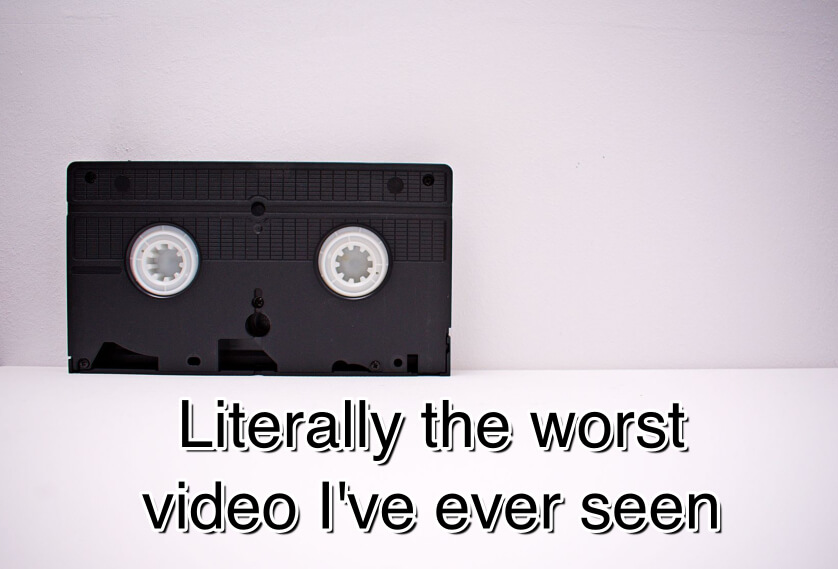 I was quite embarrassed when this friend of mine showed me the video that he had put together to promote his business.

Now, let me state for the record. This guy, he's not in MSP, he's not even in the world of IT support. So if you've shown me a video at some point in the past, I'm definitely not talking about you!

No, this was a friend who runs his own business in a completely unrelated sector. And he decided - quite rightly - that he should put together a video to go onto his website.

It was (and I'm not exaggerating when I say it) one of the worst videos I've ever seen.

First of all, it started with a really, really, REALLY long logo shot. You know, a flying logo with all the different elements coming together and a bit of cheesy music.

It took eight seconds for the logo to come together. Very few people will get past those first eight seconds, which is maybe a good thing because of what followed.

Then, the video itself was completely animated with a terrible, cheesy voiceover off the internet. Terrible animated cartoon characters, and you know that hand that you used to see in lots of videos some time ago?

You know the hand that moves things around on the screen and writes in a fake pen? It was one of those.

Believe me, that was a very awkward conversation as I told my friend just how bad that video was

It's not one of my super powers to hold back when I'm looking at some shocking marketing.

The good news is I've never seen an MSP video quite that bad.

Thinking about it, I don't see that many MSP videos. And yet video is the number one engagement tool.

Think about it this way. Very few of the decision makers that you want to reach know how to tell a good MSP from a bad MSP. And that's because they're not techs.

Since they don't have that cognitive ability to decide between MSPs, they are picking "what looks good" using their emotions.

It's purely a heart decision with a rubber stamp from the brain. And that's why your marketing needs to be so good because the heart is more influenced by emotional marketing than anything else.

And you know what the number one engagement tool is for the heart? It's VIDEO. That's why you need more videos

In fact, there're two types of video that you need.

Number one, you need a slick, well-produced, 60 second video to go onto your website's home page.

It should be the first thing that people see on your home page. And the best kind of video for this is your clients talking about your business.

A video like that, refreshed every two to three years, will have a major impact on the amount of leads that your website generates.

That homepage video needs to be done properly and professionally though. You need to get a storyteller who can produce exquisite visual images, the right sound, and do it all in an entertaining way.. And edit and cut it together so it's 60 seconds of pure pleasure for the prospect watching it.

Now, the second type of video needs a little bit less of a commitment. It's the kind of video you share on LinkedIn and on social media and put on your blog.

This kind of video can be literally just you with your mobile phone talking directly to the viewer. It's much more disposable content. But ultimately, whether you're using video on your homepage or on your social media, there are three criteria that it must meet.

1) It must be full of real people, not presenters, not animated characters, but real people

2) It needs to be relevant to the viewer. This is a general marketing rule. The more relevant your marketing is to someone, the more likely they are to take action on it. It's why operating within a specific vertical is so powerful.

And 3) it needs to be rapid. 60 seconds is the perfect length for a home page video. You can do much longer on your social media videos, but it's still got to be fairly fast paced. Just get on with it and tell people stuff that they are interested in.

At my free MSP marketing lunches, I show you a couple of example videos

We're now at the stage where we've got very few places left for these events. They're just three hours out of your day, completely FREE. With lunch on me too.

To claim one of the final places, you just click this link here, and fill in the form. Your lunch is completely free. I tell you on the web page why i can afford to do this.

Join 4,284 MSPs worldwide who already have a copy of this book.

How MSPs can track what marketing works, and what doesn’t work

Video: How to stand out as different to your many competitors

Craig’s story: How to do a multi touchpoint marketing campaign during lockdown