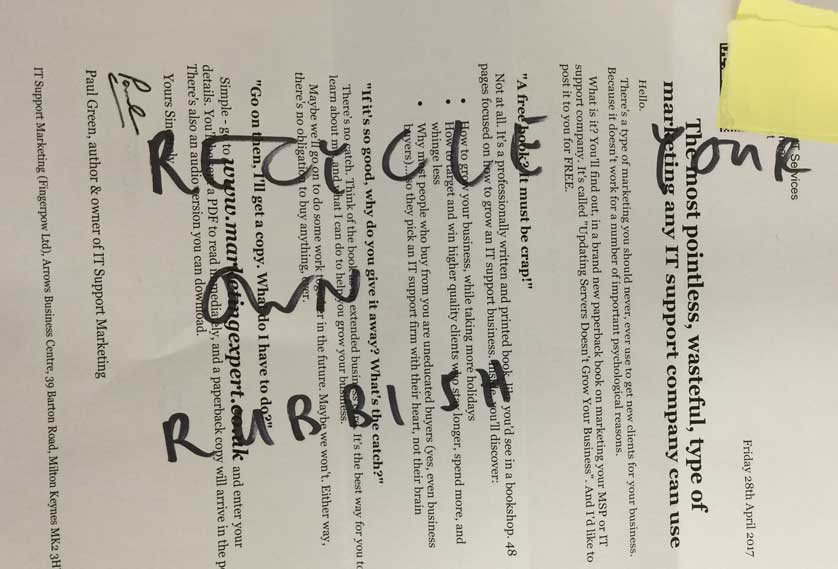 Some odd stuff turned up in the post for me, last week.

First off, at home, we actually had a Yellow Pages delivered. Look: I honestly didn’t know they were still printing them. It’s very small. And they seem to have combined Milton Keynes with a number of the surrounding towns into one directory.

I had a quick flick through before it went in the recycling bin. And no, there weren’t any IT support companies in there.

Then, at the office, this was waiting in my post tray. The first clue that something was up was the lack of postage:

I opened it, and inside was a copy of a letter I’ve been sending out to IT support companies across the UK.

You probably didn’t get one, as I’ve only been sending it to those companies that haven’t yet opted in to my marketing list. The purpose of the letter is to tell them how to get a free paperback copy of my MSP marketing book.

A number of these letters have come back as undelivered. This one was different. The recipient (blanked out for confidentiality) had written me a little message: “Recycle your own rubbish,” the message says.

Fair enough. I accept that not everyone is open to getting a letter out of the blue. I was expecting a high proportion to go in the bin.

But here’s the strange thing… having written that note, they then took the time to type my address onto an envelope, and pop it into the post back to me!

Why would you do that?

I call people who do stuff like this “haters”. They’re the ones who are so incensed by someone doing something different, that they hit back at it in the most passive aggressive way they can.

When you’re growing your business, you have to ignore these people. The more marketing you do, the more people will notice you. And the more likely it is you will attract criticism.

One of the MSPs I’m working with wrote a book to promote their business and give them a point of differentiation. They use it as a 100 page business card, which is a surprisingly effective tool. At a networking event, one of their direct competitors verbally attacked them for doing it.

I think that’s something to celebrate. Because the attack was probably driven by fear.

You simply cannot allow yourself the headspace to listen to the critics and the haters. You must stay focused on the reason you are doing more marketing – to get more new clients, grow your business, and give yourself the best possible life.

Get a new client: You can afford to spend this much

Was your marketing as crap as mine was in 2005?