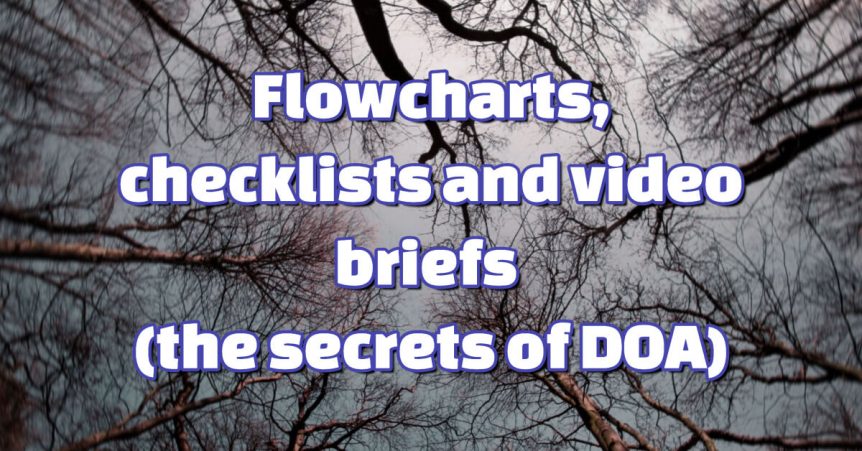 One of my favourite acronyms is DOA.

No, it doesn't stand for Dead On Arrival (although that's what you'll be if you keep trying to do everything yourself).

It stands for Delegate, Outsource, Automate.

Because I believe that using the mindset of DOA, you can achieve a hell of a lot more in your business. While having a lot less stress. And not getting home every night so tired, all you can do is reach for the wine bottle.

We've all been there. And it's not fun for you, or fair on your family.

I truly believe that as an MSP owner, you should only do, what only you can do

Even if you're doing that stuff now, eventually someone else can do this to for you, because there are much more important things that you need to do.

There's stuff that you're doing right now that you could easily outsource to someone else. Especially if you start with the non-technical stuff - the admin and the implementation of specific elements of the marketing.

We are so lucky to benefit from a very mature and safe outsourcing infrastructure using platforms such as Fiverr.com and PeoplePerHour.com.

Most of the marketing jobs that you need to get done, things like writing, creating videos, designing stuff, cleaning or handling data... there are people out there that can do them for you.

Or if you just need someone to do "stuff" for you, why not buy the services of a general virtual assistant, a VA.

I outsource all sorts of stuff to all sorts of people. One of my favourite tricks when I'm looking for someone to do a new task for me for the first time - where I know I will be repeating that purchase - is to give exactly the same job to three different people.

Because then I can not only see how the quality varies between the work delivered by those three, but I have other work to compare each of their output against. So I can pick the best of the three.

That's worked for me over a number of years, when finding new suppliers.

And here are my favourite three ways to do that.

This is great for when you want your outsourced help to actually do some decision making for you.

I have a VA called Becky. She lives only about half an hour away from my home in Milton Keynes, but we only meet about once a year. In fact, we're more likely to meet in social situations than we are for business, as we have a shared group of friends.

But every couple of months I come up with something new I'd like her to do, and often I will create a flow chart to help her with her decision making.

This isn't because I don't trust Becky - she's a very intelligent and capable person.

But the thing is I want something to be done in a very, very specific way. So I will put together a flow chart to help her understand how I'm thinking, what I want to be done, and exactly how I want her to do it.

Let me show you an example of flow chart that I sent to her recently.

We collect lots of leads on our website and up until the last few weeks, it's been completely automated. In that if you went onto my website and requested a copy of my free book on MSP marketing, you filled in your address, and my CRM Infusionsoft just handled everything automagically.

But we've noticed as we've dramatically increased our marketing in the last few months, we've had a lot of wastage come through. People who don't own or manage IT support companies have tried to join the list (tut). And we've been attempting to post books to people outside of the UK. Which has been creating havoc for my UK-only fulfilment house.

So we've revamped the system. It automates all the sending out of PDFs and all the digital stuff, but the physical sending out of the book now requires a human intervention. A quality check, if you like.

This is the flow chart (built in draw.io) that I've sent to Becky to ask her to check every single lead that comes into the business now. 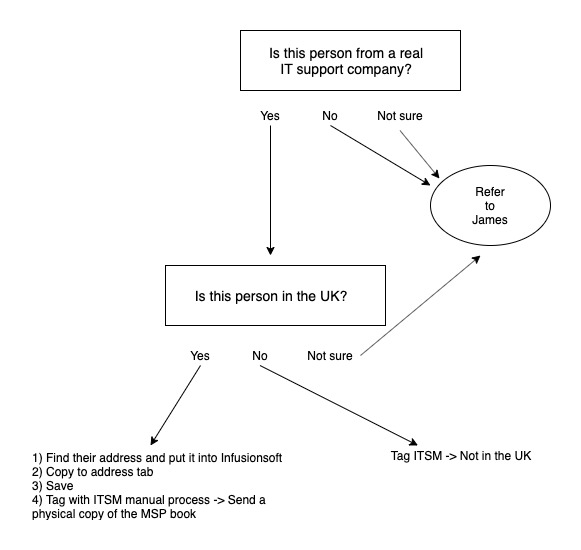 As you can see, it makes life really simple for her.

And you could argue that it's so simple that once she's done it a few times, she won't need that to refer back to the flow chart.

Don't we often find that it's the lower level minor stuff that our team tend to get wrong?

How often have you noticed that a human system mysteriously stops working for no apparent reason, when someone returns from a holiday?

How often have you had to fix a new server that's just been installed, because someone somewhere forgot to tick a box in a setting.

It's why you need to create a system for every job and document it. And that leads on to number two.

Anytime you have a series of repeatable tasks, you do a checklist.

If you read the book, The Checklist Manifesto, by Atul Gawande, an American doctor, you'll see that it's always the small things that get forgotten.

In his book, he talks about how surgeons can do hours of complicated surgery without the need for checklists or guides or training manuals. And they do them perfectly.

But it's the little things like the patient aftercare, and making sure that the patient gets a lifesaving drug 20 minutes after surgery, that tend to get forgotten.

It's always the small things.

So you should be putting together checklists and standard operating procedures for everything within the business. Systems like IT Glue and IT Boost are great for this.

But checklists aren't just about writing down what needs to be done. You also need to get your staff engaged with them.

In fact, I would argue that's half the challenge of systemising your business. Luckily, engagement isn't something you have to worry too much about when outsourcing work.

If they're not engaged, they don't do the work, you don't pay them, and you move on to the next Fiverr supplier.

It happens. There're more suppliers than there is work, so we're blessed to be a in buyer's market.

Let me show you the checklist for someone joining my MSP Marketing Edge service.

Much of the work when a new client joins is completely automated, but there are a series of things that just need to be done by a human.

Again, this is a job for trusty Becky. And here's a checklist that I ask her to follow for every single new client. It means that we're dramatically less likely to get something wrong. 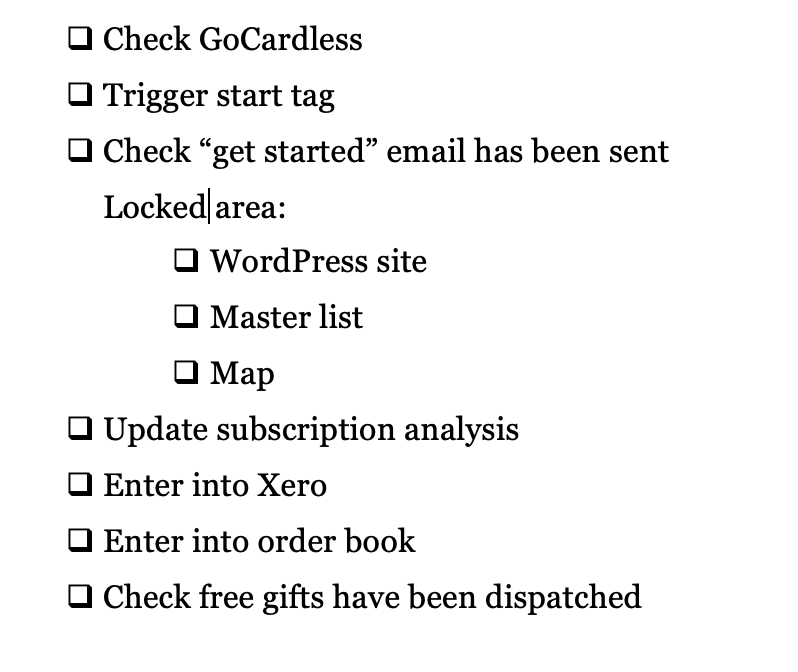 Then we go onto the final one...

When ever I'm briefing anyone, whether it's people who work for me within the business, or outsourced people like Becky or Fiverr suppliers, I will 99 times out of 100 do them a video brief.

I've found it's the most effective way to show them:

Yes I am a control freak. Show me a business owner who isn't 🤣

In the spirit of DOA, the only purpose of giving this stuff to other people, is for them to do the work so that you don't have to. That's the dream, right?

So doing a video brief means you have to be 100% focused on exactly what it is that you want.

I never film a video brief unless I've sat down and figured out the job beforehand. I'll often put some notes on the screen, just to refer back to.

And I believe you need to put your face on the screen as well. This is a video brief just for one or maybe two other people to see, but if they can see your face, they're much more likely to connect with you as a person, and in my experience do a great job.

I'm launching an MSP Marketing podcast on the 5th of November. It's been delayed a few times as we get it absolutely perfect and ensure we can put out a high quality episode every single week.

I have a fantastic audio editor and technical guy called James, who's doing much of the hard work for me. And this is a video brief I did for him of how I want my show page to be set up.

Can you see how he can refer back to that? The video becomes a training aid.

In fact, what you could do with that video is transcribe it using a service like Rev.com so he has the transcript to refer to.

And even pull out a summary of the things you want him to do into a checklist.

I don't need to do that with someone like James because he does this for a living, so he knows what he's doing.

But even with that high technical ability - now he knows exactly how I want it to be done.

And in the future, if he dares to stop being my supplier, I have the training for the next person ready to roll.

By the way, the software I've used to create that video is called Camtasia. It allows you to show where the mouse is and when you click on things. There are plenty of alternatives that do a similar job.

This is DOA to the max

What we've achieved with just these three things, is a very high level of specific instruction for outsourced help.

Do you know... you don't have to use this just for the outsourced help. You could do exactly this for your staff as well.

Achieving consistency and a constant high level of quality within the business is about:

As business owners, we're far too guilty of not telling people exactly what we want them to do. And certainly not telling them how we want to do it.

And then we get annoyed with them, because they haven't done it the way we wanted it to be done.

Join 3,623 MSPs worldwide who already have a copy of this book.

MSP Marketing Edge preview: “But I don’t have time for that”

You have to DOA so you don’t end up DOA

Foundation events video 3 of 3: The only silver bullet to grow your business

Your overflowing hassle bucket (and the DOA relief tap)