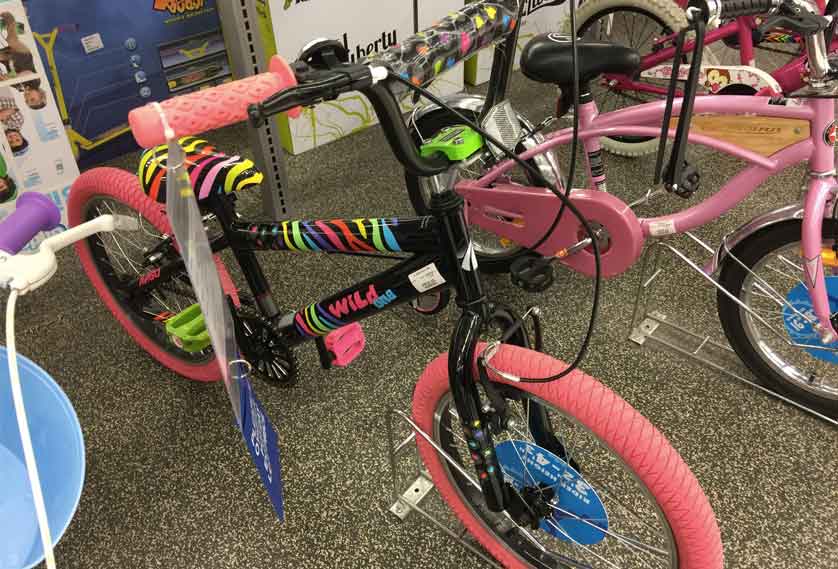 Crisis. My 6-year-old daughter needed a new bike. And the only one she liked was sold exclusively in Toys R Us.

It took some time to get her to look at this one. For ages, she wouldn’t consider any bike unless it came with a free soft toy, after spotting a promotion for a free monkey.

But eventually, she settled on this Day-Glo beauty: Here’s why this was a crisis. I have lots of skills and talents in life. But building and repairing bikes (or any machinery) is not one of them.

So when I need something doing, I’m very happy to pay someone else to do it for me.

To me, a new bike must come from Halfords, or an independent shop that only sells bikes. Because that’s what they do. In my head they’re the experts.

So we bought the bike, paid an extra £5 for the building service, and went to the collection counter.

The girl brought out a flat pack box. “Er, we paid for the build service,” I said.

“Did you?” she replied. “Oh, well we can’t do that today. You’ll have to come back tomorrow.”

“What time tomorrow,” I asked.

“Whenever, really. I’m sure someone will build it in the morning,” she said.

Now there’s a sentence to fill you with fear. Someone will build it in the morning. Not a bicycle build specialist. Just… someone.

I pressed to have the build booked in at a specific time, and 24 hours later we picked up the built bike. According to the checklist I was given, a number of different items had been checked by the builder and again by a supervisor.

So we were quite surprised when the front wheel seized up just 20 minutes later, while my daughter was trying to cycle around one of Milton Keynes’ many lakes.

Back to Toys R Us – the front brakes hadn’t been fitted properly.

15 minutes later, the bike was working properly. And I had sworn internally that I would never let my daughter even see Toys R Us bikes again.

There’s a marketing lesson in this

Toys R Us probably has exactly the same building process as Halfords. With the same kind of staff. And maybe mis-adjusted brakes is just something that happens now and again.

But in marketing, it’s never about reality. It’s about perception.

My perception is that Halfords are experts and do a better job.

That perception is a feeling, not a cognitive thought. And it will have a surprising amount of power over me in the future.

Interestingly, when people are driven by powerful perceptions, price becomes less of a factor. I would happily pay £20 for Halfords to build a bike in future.

Paint a picture of being the perceived expert, and price becomes A factor, not THE factor.

Handy calculator: Why your marketing MUST be more than just new clients

Yes you can be too cheap. And it’s a sales killer