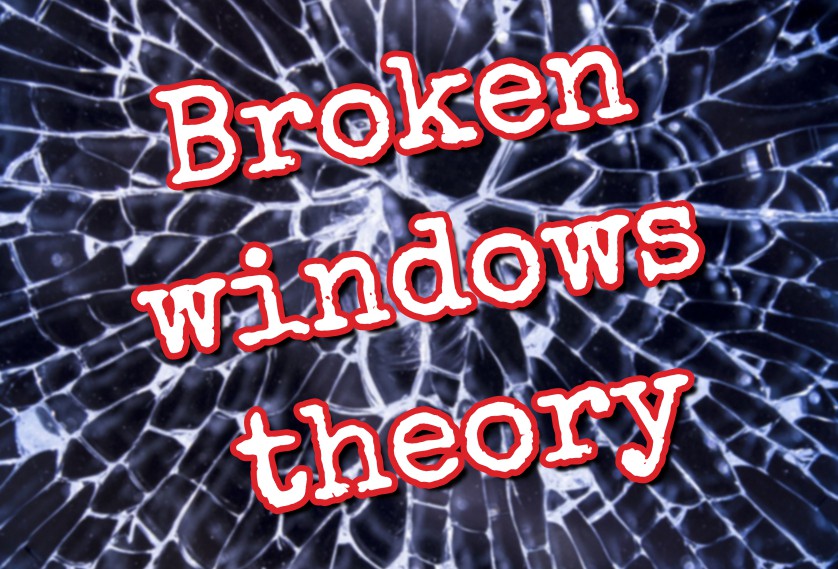 Have you heard of broken windows theory? No, it's nothing to do with problems upgrading from Windows 7 to Windows 10...

It's a policing theory that if you permit small visible signs of crime to remain, they eventually and inevitably lead to bigger, more serious crimes.

I live on the edge of Milton Keynes (the world's best new city), and my daughter goes to school in a village about 10 minutes' drive away. That's a screenshot from Google Maps, from July 2018. The cottage was empty but was otherwise fine.

Then at some point in the last year, a window was broken by vandals. This cottage is in the middle of nowhere, and when that first window wasn't fixed, the vandals soon came back and smashed all of the windows.

Every week as we drove past the cottage, it looked shabbier and shabbier. People started dumping rubbish there. There was possibly even some graffiti (I can't quite remember).

And then... a few weeks ago, broken windows theory reached its inevitable conclusion... I don't know whether the fire was an accident (such as an electrical fault) or deliberate.

But it all started with one broken window, that was never repaired.

It sent a message to the vandals: If you do damage here, there are no repercussions.

The technician who turns up 10 mins late for work one morning, and isn't challenged in any way, is sent a message: If you do damage here, there are no repercussions.

So he will do it again. And again. Because he can. And soon, he is late more often than he is on time.

Then other staff notice. They notice that he waltzes in late all the time, and isn't told off. So some (not all) will copy that behaviour.

That lack of respect for time keeping, leads to excess time off for unspecified "medical appointments"... regular Mondays off... and of course a general drop in productivity.

Broken windows theory. In action. In your business.

So am I saying you need to tell off your staff more?

Of course not. But you do need to acknowledge when a window is broken.

"Dave, I saw you were late this morning. Can you tell me what happened?"

That's the boss equivalent of boarding up the broken window. It shows there's someone caring for the building / business.

My daughter is only 8 (and still a relative saint). From what I've read in parenting books, when she does the inevitable "teenage rebellion staying out terrifyingly late one night"... in a weird way she'll want me to shout at her and ground her for a week.

Because it will show I care.

Psychologically, your staff are very similar to teenage children. And you are their parent.

By the way, this means if you suffer from frequent staff behavioural problems in your business right now, then you are the cause of them.

Good news! You're also the cure.

Do what they did in New York. They cracked down on minor crimes like jay walking and not paying for the subway. And subsequently, the rate of major crimes fell.

Crack down on time keeping and following systems. And watch the overall respect for clients - plus net profitability - go up.

Join 3,623 MSPs worldwide who already have a copy of this book.

You have to DOA so you don’t end up DOA

Tidying up (your business)